Yep, we moved back home to Montana in 2015!!! We’re in the Mission Valley, 45 miles north of Missoula. At the base of the beautiful Mission Mountains. On the Flathead Indian Reservation. We made it back home without being in a coffee pot like Shoni’s Uncle Pat.

We are presently not in any shows.

From 2012 through 2015, we were technical advisers for the book, Horsehair Bridles: A Unique American Folk Art, by Ned and Jody Martin. It was published in 2016.

Hitching evolves as a person progresses, so here are hitching tips to help you out. Check back occasionally because new tips will be added. 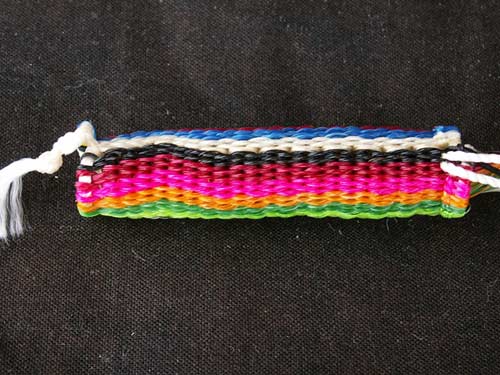 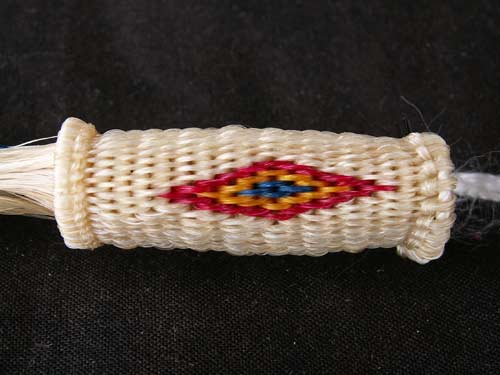 The 6 row diamond key fob is Day 2 of the 3 day workshop for beginners, with the addition of the cross hitch border (not shown in the photo). Advanced students may want this project included in their workshop. It takes 13 rows to hitch the 6 row diamond. There are 6 pulls across in the diamond apex which is where the name comes from. Students learn how to drop and add pulls.

Hitched horsehair gives you infinitely more possibilities to use your creativity.

This photo shows a close-up of hitching on a dowel. Your first project isn’t this complex. But know with your new passion of hitched horsehair and determination, you’ll reach this level.

Traditional Knots to Cover Joints; aka Needle Knots
After making the twenty plus horsehair knots on the Griz on Horse Prairie headstall, I realized how covering the knotting area with thin leather first (deer hide, goathide, or any thin leather) makes the knots look more attractive.

And it’s easier to make the knots.

Sew the leather seam with tiny stitches using sewing thread. Or wrap some thread around the leather to secure it, depending on the shape of the area and location.

This photo shows a needle knot in the making. These needle knots do not have leather under the knot area. 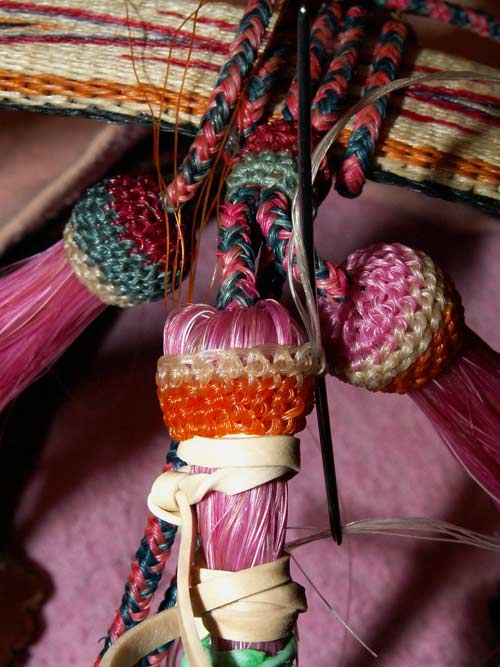 Holding the Dowel While Pulls are Tied On
Having problems holding the dowel at the same time you are tying the pulls on? Use a vise to hold the dowel.

Dye Proportions for One Quart
When using concentrated dyes that have a limited shelf life, mix only a quart. Here’s the proportion: ¼ cup white vinegar; ¼ teaspoon powdered dye; 3 ¾ cups water.

Acid dyes work best on horsehair because hair is a protein. The acid is white vinegar. Acid dyes are used on protein fibers, i.e. any animal hair. Plant fibers use other dyes. RIT dye has the chemical properties to dye both protein and plant fibers.

We use RIT dyes and Jacquard acid dyes. The only acid involved is the white vinegar that you add. Jacquard acid dyes do not have a shelf life. Once they are mixed with water and used to dye, the mixture is then thrown away. We mix only a quart at a time because of this. The dyes can be purchased from art stores, fabric stores, or Dharma Trading Company (on our Supplier List).

Use gallon proportions when working with RIT which has a shelf life. Other dyes may not.

Don’t Hitch Over Air
We’re finding in our workshops with beginning students that they do what we are calling “hitching over air”. They are not rotating the dowel quickly enough and are hitching over string that is not laying on the dowel. This creates problems with snugging down the pulls, and sometimes tension problems. Remember to make sure the string is laying on the dowel in your current hitching area.

Pattern Layout
This is covered in detail in Chapter 11 of our first book, Hitched Horsehair: The Complete Guide for Self-Learning. It starts on page 79 in the graph paper chapter. Maybe you don’t want to learn graph paper. But you sure do want to learn how to lay out your belt project so the middle of your belt is in the middle of your back. This is where to find the information.

Cuff Bracelets
3/10/2011: We’ve tried making a few more cuff bracelets because there’s such a request for them. Here’s some more experimentation. Try hitching over copper wire that comes from the large electrical wire that’s used for hot water heaters and clothes dryers. Strip the plastic off the individual wires to get one wire to hitch over. Use 7 hairs per pull over this copper wire instead of 11 hair pulls. This makes the hitching more delicate and less bulky. Hitch with the wire straight, then form it afterwards into the bracelet shape. Finish off the ends with needle knots made with waxed saddle stitching string or artificial sinew. Copper tubing can also be purchased from hardware stores.

1/29/08: Enough of you have been asking how to make cuff bracelets, so we tried a few to see what worked best. Here’s how we experimented.

Hitching over a metal rod and then bending it seemed too bulky for a woman’s wrist. We know we’ve seen these, but it didn’t work out too well here. We put the needle knot on both ends to cover up the raw ends. See page 93 of our first book on how to make these knots.

What worked best was hitching over a dowel like usual and then pressing the hitched tube flat. We then inserted a pliable piece of metal into the inside of the hitching. The metal was a bit smaller than the width and length of the inside of the hitching. Then the hitched piece was shaped into a cuff bracelet, using a rubber mallet. If you don’t have a rubber mallet, cover a hammer with soft leather, and shape with your hands. Needle knots made of saddle stitching thread were put on both ends. Do not make needle knots with horsehair – they will scratch the wrist.

With flat pressed hitching, there can be more pattern than “in-the-round”.

It may be difficult to find silver caps because of sizing. The starting end of hitching has less bulk than the ending end of the hitching because of the dropped pulls in the last row and the dropped pattern pulls. Caps also have to cover more hitched raw edges than working with beads or stones.

Hitching Jig
You do not need a hitching jig to learn how to hitch. A jig holds the dowel and provides string tension which is easier than sitting on the string for tension. A jig makes life easier. But you can learn how to hitch with just horse tail hair, a dowel, and string.

If you have a jig: C-clamp your jig to a table. This allows you to snug down your pulls because the jig can’t move around. It provides better body posture.

Photos of our student jig and my free-standing jig are in the Photo Gallery. Our jigs have a foot operated pedal which controls the gear reduction motor that has a keyless chuck which holds the dowel you hitch over.

#9 Nylon String
This string is hard to obtain. It’s used in upholstery and maritime businesses. Check out the Supplier List in our books for sources.

Originally, large cotton string was used to hitch over – most likely from the butcher shops of prisons. Later it is possible inmates “lifted” the #9 string from the prison Upholstery Shop and brought it back to their cells to hitch over. #9 string has become an industry standard.

Experiment with hitching over just one sting, as well as hitching over two strings. Adjustments may need to be made with our book directions if string other than #9 is used, especially with amount of pulls per row.

So now it’s time to clear up the “a good hitcher hitches an inch an hour” myth. That may be true if it’s a simple pattern with a small diameter dowel. But for any complex pattern over a larger size dowel – no way… Regarding difficulty of patterns: Geometrics are easiest. Alphabet and numbers are next. Pictorials are the most difficult.

Ron is a sailor, even built his wooden sailboat and is a Navy veteran. In February, 2009, he developed a theory that sailors were involved with the process of hitched horsehair. As the Spanish soldiers came to the New World by ship, they’re bored and sailors know the knots. The horses are in the ship’s belly, hanging by slings so they’re not injured. The tail hair is a raw resource, with the sailors teaching the soldiers various knots, including the two hitching knots which sailors have used for centuries. Some bridles we’ve restored since 2009 have similarities with sails, i.e. the cringles which ropes go through. We may never know if this is exactly how hitching ended up in America, but Ron’s theory is a valid consideration.

These businesses are experts at providing these services on old pieces. We have met them all and have done restoration work for all of them. They’re listed in alphabetical order.Antiques of the Old West, Elmer & Jan Diederich, P.O. Box 756, Big Timber, MT 59011; 406-932-7787;
website: www.elmerdiederich.com ; e-mail: elmer@elmerdiederich.com.