There are many styles of old hitched horsehair headstalls. We prefer this style which we used on the creation of our own Mariposa Lapwai (Spanish for butterfly, Nez Perce Indian for butterfly).

The reins created to go with the Mariposa Lapwai headstall are not traditional. We stepped it up, using 18 inches of hitched horsehair, then going into braided rawhide. Sterling silver covers the joint between hitching and rawhide. 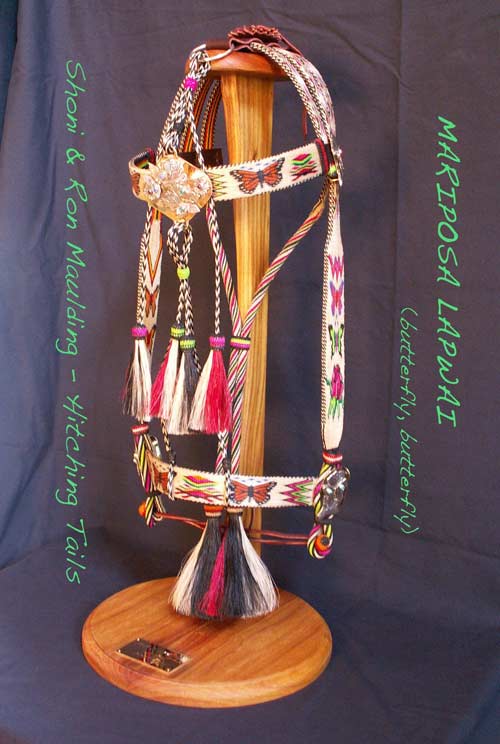 Ron is a sailor, even built his wooden sailboat and is a Navy veteran. In February, 2009, he developed a theory that sailors were involved with the process of hitched horsehair. As the Spanish soldiers came to the New World by ship, they’re bored and sailors know the knots. The horses are in the ship’s belly, hanging by slings so they’re not injured. The tail hair is a raw resource, with the sailors teaching the soldiers various knots, including the two hitching knots which sailors have used for centuries. Some bridles we’ve restored since 2009 have similarities with sails, i.e. the cringles which ropes go through. We may never know if this is exactly how hitching ended up in America, but Ron’s theory is a valid consideration.

The book, Encyclopedia of Knots and Fancy Rope Work, by Raoul Graumont and John Hensel, is a valuable resource in determining knots on the old horsehair bridles. The book also has a history of knots used by many cultures throughout time, both landlubbers and those at sea.

In the western United States, the history of hitching is intertwined with the history of territorial and modern day prisons in the western United States. It was the first hobby at Montana State Prison, dating back to the territorial prison in Deer Lodge. Charlie Russell, the famous western artist, wrote about men down at Deer Lodge “twistin hairs”. Other commonly known prisons for horsehair were located at Yuma and Florence Arizona; Rawlins, Wyoming; and Walla Walla, Washington.

Some experts can date and tell which prison an item was made at because of the colors. At various times commercial dyes were not available and natural colors were only used. Pink was a popular color in old headstalls. At Montana State Prison, cotton butcher twine was “lifted” from the slaughter house and used to hitch over.

As inmates came and went from prison, hitching cycled in and out, to the extent of being almost a lost art. Once an inmate discharged (finished all his time), or was paroled, he usually discontinued hitching. Because hitching is so time intensive, it’s difficult to make a full-time living.

The elaborate barter system inside prison walls included knowledge on how to hitch horsehair. Some inmates have paid the equivalent of up to $1,000 to learn. This price could include the student making 3,000 pulls for the teacher before hitching lessons even began.

Prison hobby programs have changed since the 1800’s territorial prisons. But the purpose has remained the same. Allowing hobby keeps the inmates busy, which creates less pressure and less trouble. Hobby also builds self-esteem, which reduces tension. A 1987 study in California showed that inmates who did hobby more than six months were 51% less likely to return to prison. Other research concluded that inmates participating in art programs showed a 70% to 80% reduction in violent and other disruptive behavior while in prison.

Today, with the increased knowledge on how to hitch horsehair, a prison connection is not necessary in order to learn. Though still obscure, this is no longer a lost art. Contemporary hitchers are expanding both the patterns and products created with hitched horsehair.

Hitched Horsehair and Braided Horsehair were inducted into the Montana Cowboy Hall of Fame & Western Heritage Center in 2017.

These businesses are experts at providing these services on old pieces. We have met them all and have done restoration work for all of them. They’re listed in alphabetical order.