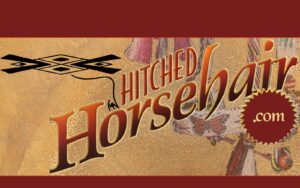 Yep, we moved back home to Montana in 2015!!! We’re in the Mission Valley, 45 miles north of Missoula. At the base of the beautiful Mission Mountains. On the Flathead Indian Reservation. We made it back home without being in a coffee pot like Shoni’s Uncle Pat.

We currently have no shows or exhibitions scheduled.

Ron and Shoni Maulding are an award-winning team who have taken hitching to new levels. We collaborate on all our projects, though not always working on each project together. Shoni hitches horsehair. Ron produces the leatherwork and metal work, usually sterling silver, for the hitched inlays in bolos, buckles, necklaces. He also creates the metal and semi-precious stone work for the bridles and quirts. We take hitched horsehair into non-traditional objects such as a full-size Indian cradleboard, quiver, purses, and jewelry. Our business name is Hitching Tails. 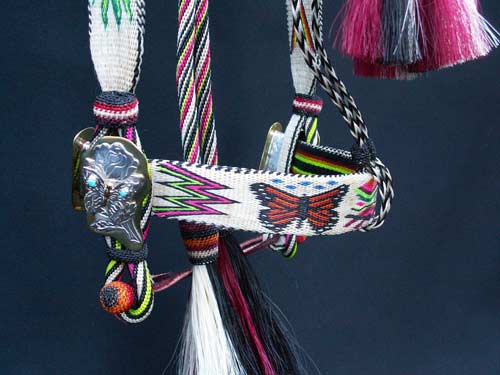 Shoni is a 6th generation Montanan with agricultural ties to ranching, farming, and commercial beekeeping. Her ancestral ties of Northern Shoshone and European blood, and Ron’s ingenuity and creativity show in their work.

Mariposa Lapwai (butterfly, butterfly) has been our most challenging, rewarding, and collectible piece. Ron’s sterling silver pieces are his most complex work as he incorporated engraving to enhance the three dimensional roses and butterflies. The browband has 29 separate brazing steps, done in a strict sequence. Our Mariposa Lapwai bridle is priced at $26,000.00.

We believe we are the first to inlay hitching in sterling silver. The bezels are complex to make because of forming a relatively thick amount of metal to two arcs of angles to its maximum capabilities, without fatigue of the metal. Ron, from an agricultural background, also works with wood – from longbows to furniture to all aspects of home building.

For our larger projects, we have four goals. The item must:
• Be functional
• Have a theme
• Have a story
• Be one of a kind

It is this criteria that set our Flight of the Nez Perce in 1877 apart from other items at the 1999 Western Design Conference in Cody, Wyoming, when the ensemble won Best Artist in the Jewelry/Fashion category.

We work with this Webster definition of inspiration – “divine influence, seen as the working of the Holy Spirit in the human soul”. This includes the lightbulb ideas as well as the grunt work of seeing an idea through, including the tediousness of hitching, the fine sanding of wood, the attention to detail in the products they make.

Our goals were for Shoni to learn to hitch, write a how-to book, and teach workshops. Hitched Horsehair: The Complete Guide for Self-Learning, © 1997, was the first book. It was followed by Hitched Horsehair II: Advanced Patterns and Inlay Projects, ©2004, written by Ron and Shoni. Our publishing company is River Publishing. 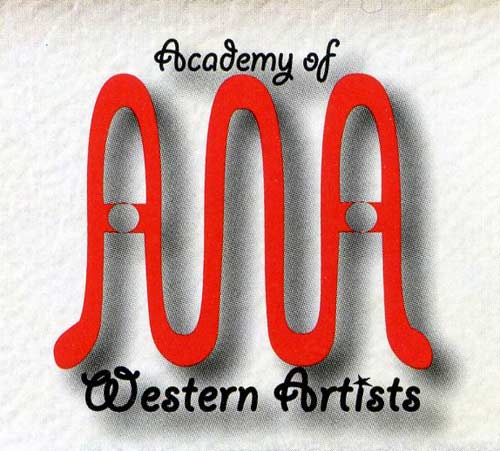 Shoni was inducted into the Academy of Western Artists as Horsehair Hitcher of the Year, 2012, which is a lifetime achievement award. The Will Rogers Cowboy Awards were established by the AWA in 1996 when western publisher, Bobby Newton, saw the need to recognize the performers and artisans who were taking the contemporary cowboy and western movement to new and exciting heights.

Ron and Shoni attended the ceremony in February, 2013, at Fort Worth, Texas, where Shoni received her Will Rogers statue. The trip was memorable – both the ceremony and the kind people of Fort Worth who showed us around the city and helped us navigate public transportation. The Fort Worth Stockyards Museum is a must. To support AWA and become a member, go to www.AWAAwards.org .

From 2012 through 2015, we were technical advisers for the book, Horsehair Bridles: A Unique American Folk Art, by Ned and Jody Martin. It was published in 2016.

We have been commissioned for restoration work for High Noon, Los Angeles, California; Fighting Bear Antiques, Jackson, Wyoming; Antiques of the Old West, Big Timber, Montana; Medicine Cap Studio, Port Orchard, Washington, and individual collectors. We restored some of the bridles photographed in the book, Horsehair Bridles: A Unique American Folk Art, by Ned and Jody Martin. At the present time, we are not taking any restoration projects.

Shoni was inducted into the Stetson Craftsman Alliance in Cody, Wyoming, in September, 2010. Pamela Fields, Stetson CEO, presented a Stetson hat and certificate to Shoni and eight other women. This was part of the Women Who Design the West show directed by Thea Marx. The show was also endorsed by Stetson. The mission of the alliance is to recognize and honor excellence across western craft disciplines.

Rod Miller’s article about us and hitching in Ranch & Reata was a great one.  It’s the October/November 2012 issue.

Kyle Partain won second place in the feature writing category at the annual American Horse Publications awards for his article about hitching in Western Horseman, August 2005. It was accurate and informative. Kyle interviewed us, including photos, but that’s not the reason why it was a good one. The article was about hitching, with quotes from hitchers.

KSPS TV Interview
We were interviewed by KSPS PBS TV station in Spokane, Washington, for their Northwest Profiles program in October, 2006. The interview is on their website, www.ksps.org . It is also on YouTube. The interview is not an instructional video, but does show Shoni hitching and Ron doing silverwork.

Radio
The Horse Show with Rick Lamb featured us in a radio interview which still occasionally plays.

Shoni became interested in hitching when Ron was Hobby Director at Montana State Prison. Ron successfully revived hitched horsehair at MSP when he recognized the beauty of it, and knew the almost lost art needed to be saved. When an inmate offered to teach hitching, formal classes were set up as part of the hobby program. From there, it took off as dealers started buying from the inmate store or contracts with individual inmates.

Meanwhile, Shoni was laid off from her commercial beekeeping job due to drought and farm economics. She could not learn from inmates because of conflict of interest with Ron’s job. By self-study of the information that was available outside of prison walls, inspiration, commitment and determination, hitching became her new passion.